SBICAP Ventures Ltd. is an alternative asset manager based in India and is a wholly owned subsidiary of SBI Capital Markets Limited. It manages the Neev Fund.

Manav has been a private equity investor and investment banker for 20 years in Infrastructure, healthcare and technology.
Since 2013, Manav headed India operations for Brightlink Partners, Inc – an investment and advisory firm headed out of Tokyo, Japan and focusing on Indo-Japan investment in India and Asia.
From 2014 for two years, Manav was also a Partner at Brescon – a shop specializing in special situation asset advisory.

Earlier from 2006, Manav was the founding member of Macquarie’s infrastructure team in India which raised c. US1.2bn fund in partnership with IFC Washington and State Bank of India. Located in and heading the New Delhi office, Manav was the face of Macquarie to the government – leading consultations with line ministries and the Finance Ministry. Subsequently, as Director at SNC Lavalin India Infra fund (a subsidiary of Canada based SNC Lavalin), Manav originated and concluded private equity investment in road assetco and was helping to raise an India focused fund that had soft commitments of over US$ 200mn.
Manav has also worked at advisory/corporate finance at PwC and KPMG leading initiatives for corporate advisory, privatization, cross-border M&A, and policy advisory to the governments.
He is an MBA with graduate degree in engineering.

At CapAleph, he handled the Infrastructure Support Services and Education & Skill Development segments for the Fund. At GMR Infrastructure, he was part of the Project Finance team working on the road sector where he submitted multiple bids to the NHAI. He has been part of teams that have invested over US$100Mn in the Indian infrastructure space.

Akshay holds a bachelor’s degree in Commerce and PGDM/MBA.

Ashwin has 7 years of experience in the financial services space working with Citi investment banking, Matrix Partners VC fund and TVS Infrastructure. He has been involved in many M&A and capital raising exercises in his previous stints.
Education: MBA from IIM Ahmedabad and BE (Electronics) from Pune University. 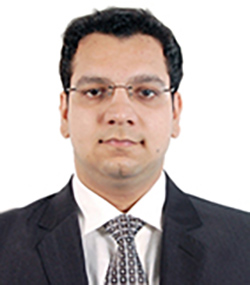 Abhishek has 4 years of work experience in the financial services and infrastructure space with EY investment banking & infrastructure services, and Vikram Solar. He has worked on transactions in the waste management, hospitality, logistics & warehousing and real estate space.
He has also pursued the Indian Chartered Accountancy and CFA (USA) course.
Education: MBA/PGDM from IIM Calcutta and BBA (Hons.) from St. Xavier’s College, Calcutta.

Jai has over a decade of experience across Fund Management, Strategic Advisory, Equity Research and Investment Banking working with Kitara Capital, AltFort Capital. He has executed various deals in the Private Equity and Investment Banking space. He has been also involved fund raising, fund formation and strategic advisory roles.

Jai holds a bachelor’s degree in Commerce and MBA in Finance.

Anjana has more than 15 years of experience in the field of sustainability, ESG and impact measurement. She leads the portfolio for ESG due-diligences, ESG actions and review, technical assistance, capacity building and programme results & monitoring.

In addition to an important ESG compliance function, she plays a key role in delivering additional value from systemic improvements across the portfolio. Prior to her role at the fund, she was leading the sustainability programme at IndusInd Bank.

Anjana holds bachelor’s degree in Architecture and Masters in Planning with specialisation in Environment.